The ESFS covers both the financial stability and supervisory authorities:

While national supervisory authorities are in charge of supervising individual entities, the ESAs work  on harmonising financial supervision in the EU by developing a single rulebook and promoting the consistent application of the rulebook to create a level playing field. The ESAs also assess risks and vulnerabilities in the financial sector. ESMA is a direct supervisor of credit rating agencies, third country central counterparties (CCPs), securitisation repositories and trade repositories, including for securities financing transactions. ESMA will take over additional responsibilities for the supervision of critical benchmarks, data service providers, and third country firms in a number of different areasThe main objective of the ESFS is to ensure that the rules applicable to the financial sector are adequately implemented in order to preserve financial stability and to promote confidence in the financial system as a whole and provide sufficient protection for financial consumers.

Along with the two other European Supervisory Authorities, EBA and EIOPA, ESMA forms part of the Joint Committee which works to ensure cross-sectoral consistency and joint positions in the area of supervision of financial conglomerates and on other cross-sectoral issues. 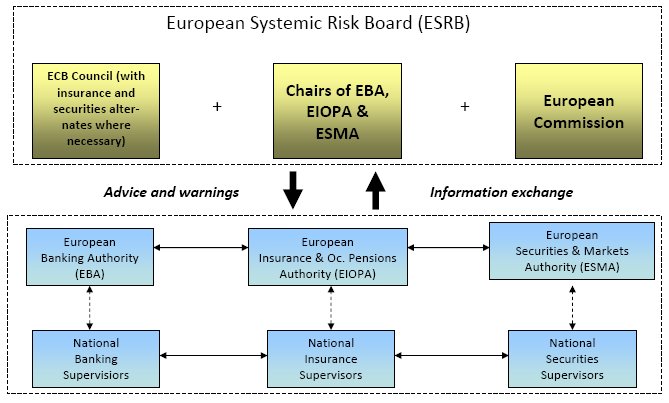 The two governing bodies of ESMA are:

The Executive Director is responsible for the day-to-day running of the Authority, including staff matters, developing and implementing the annual Work Programme, developing the draft budget, and preparing the work of the Management Board.

In line with EMIR, ESMA established a CCP Supervisory Committee with a permanent Chair and Independent Members dedicated to promoting convergence in the supervision of EU CCPs and supervising systemically important third country CCPs.

The Board of Supervisors is supported by a number of Standing Committees and working groups who deal with technical issues. These are chaired by Board Members and bring together the national experts in specific fields for the purposes of developing policy or promoting supervisory convergence. They are supported by staff of the Authority, and work with the aim of strengthening the network of regulators in a given area as agreed in a tailored set of terms of reference

The Securities and Markets Stakeholder Group (SMSG) was established under the ESMA Regulation to facilitate consultation with stakeholders in areas relevant to ESMA’s tasks.  The members represent: financial market participants and their employees; consumers and other retail users of financial services; consumers, users of financial services; and small and medium sized enterprises. ESMA is required to consult the SMSG on its draft technical standards and guidelines.

These are groups of market participants (practitioners, consumers and end-users) set-up to provide technical advice to the Standing Committees and are drawn from across the EU. They do not represent national or a specific firm's interests and are complementary to the normal consultation process undertaken by ESMA in developing policy.

ESMA established an Advisory Committee on Proportionality (ACP) to advice how specific differences prevailing in the sector, should be taken into account when applying its actions and measures. The ACP looks both at actions and measures already in place, and those being developed. Specific differences may relate to risk, business models and practices, or size of financial institutions and markets and need to be of a certain relevance.

The ACP reports directly to the ESMA Board of Supervisors.

The Board of Supervisors and the ESMA Management Board can request advice from the ACP. The ACP will also review how its advice and recommendations have been taken into account.

The European Systemic Risk Board (ESRB) carries out macro-prudential oversight of financial markets at the European level. Its objective is to prevent and mitigate systemic financial stability risk in the European Union in the light of macro-economic developments. The ESRB carries out a range of tasks including the collection and analysis of relevant information, risk identification and prioritisation, issuing warnings and recommendations and monitoring their follow-up, and providing assessments to the Council on the existence of any emergency situations that may arise. It also cooperates with other members of the ESFS and coordinates actions with other international financial organisations such as the International Monetary Fund (IMF) and the Financial Stability Board (FSB).

ESMA contributes to the work of the ESRB, by providing data and undertaking stress tests in close co-ordination with the other ESAs and the ESRB. ESMA is a voting member of the General Board, along with the other ESAs, the European Commission, the President and Vice-President of the European Central Bank, the Governors of the national central banks, the Chair and Vice-Chairs of the ESRB's Advisory Scientific Committee and the Chair of its Advisory Technical Committee.